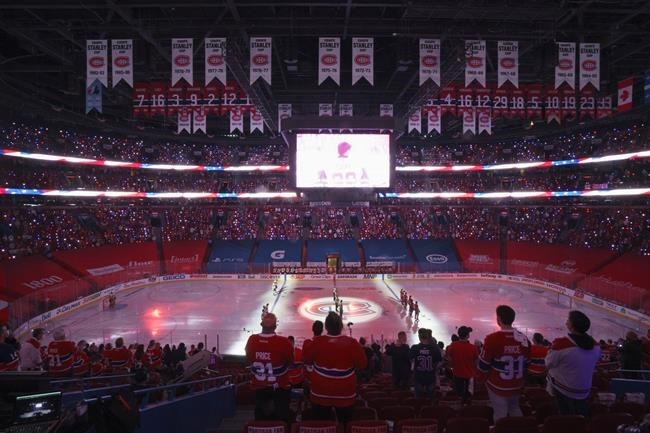 MONTREAL — Women, English speakers and young people are more likely to support land acknowledgments by hockey teams, according to a new survey commissioned by the Association for Canadian Studies.

MONTREAL — Women, English speakers and young people are more likely to support land acknowledgments by hockey teams, according to a new survey commissioned by the Association for Canadian Studies.

The survey of 1,512 Canadians, conducted by Leger Marketing between Oct. 22 and 24, found that support for land acknowledgments was strongest in Ontario, where 52 per cent of respondents supported the acknowledgments and 29 per cent opposed them.

Support was weakest in Quebec, with 31 per cent of respondents in favour and 47 per cent opposed.

People in Manitoba and Saskatchewan were most likely to oppose the statements, with 49 per cent of respondents saying they don’t support them, though support for the statements was slightly higher than in Quebec, at 33 per cent, due to a smaller percentage of respondents who are undecided.

The survey comes after a controversy over the Montreal Canadiens reading a statement before home games recognizing that they are playing on unceded Indigenous territory and thanking the Mohawk Nation for its hospitality.

Quebec’s Indigenous Affairs Minister Ian Lafrenière criticized the statement, saying it may have made a mistake when it named a specific people as it’s unclear who were the first people to live in what is now Montreal.

That criticism was in turn denounced by the Mohawk Council of Kahnawake.

Grand Chief Kahsennenhawe Sky-Deer said in a statement that land is an essential part of Mohawk identity.

“It holds the knowledge of our ancestors, our history and our presence, now and for the future,” Sky-Deer said. “Opinionated commentary that challenge and discredit our presence are not only insulting, they are taken as displaced attacks on our existence.”

Following the controversy, a different version of the statement was read at a recent Canadiens home game, but the team did not respond to a request for comment about the changes from The Canadian Press.

The Edmonton Oilers, Winnipeg Jets and Vancouver Canucks are among the teams that also have land acknowledgments read before home games.

In the Montreal region, the survey found similar results to the rest of the country.

Surveys conducted using online panels cannot be assigned a margin of error because they are not considered truly random samples.

This report by The Canadian Press was first published Oct. 28, 2021.

This story was produced with the financial assistance of the Facebook and Canadian Press News Fellowship.