Inside Climate Pledge Arena, the NHL’s building of the future 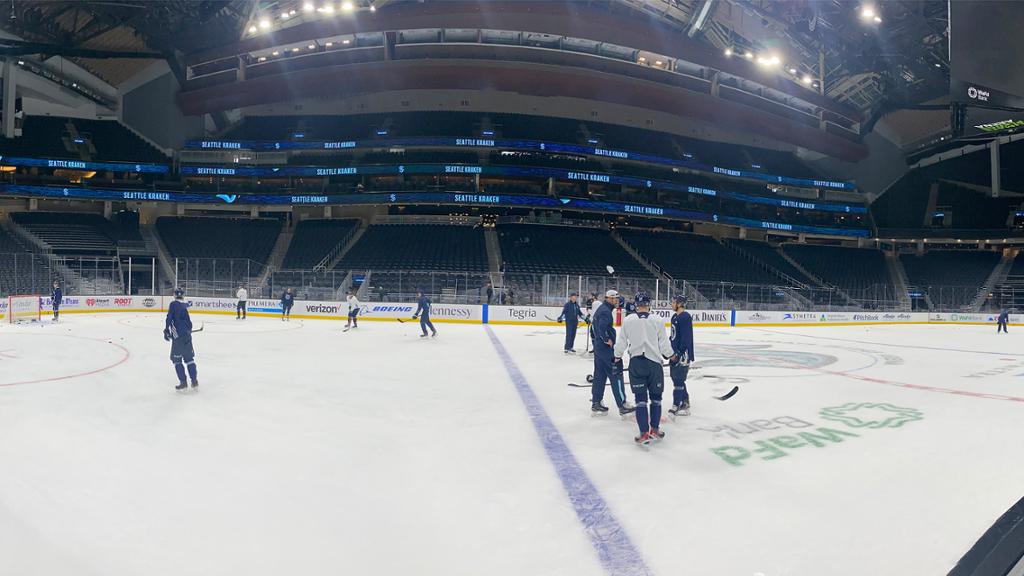 SEATTLE — The Wild will mark its first-ever game against the NHL’s newest franchises on Thursday night when it plays the Seattle Kraken at the sparkling Climate Pledge Arena.

Minnesota will be the third ever game for the Kraken at the building, which officially hosted its first-ever hockey game against the Vancouver Canucks over the weekend. Seattle earned its first win on home ice Tuesday in a victory against the Montreal Canadiens.

Even though the arena has hosted a pair of games already, work continues at the facility as crews continue to tweak, repair and add subtle touches to the building. Workers in hard hats were more prevalent than hockey players were on Wednesday, as were large groups of people taking tours of the arena, which features a number of unique finishing touches seen nowhere else in the NHL.

With the Wild and Kraken about to embark on game one of their history, here’s a small guided tour of the NHL’s newest arena:

One of those most fascinating parts of Climate Pledge Arena is that it is essentially a brand new building underneath an old but very historic and unique roof.

The roof that sits atop the arena is the same one that sat atop Key Arena, the longtime home of the Seattle SuperSonics of the NBA before they left for Oklahoma City in 2008. It’s unique, because the roof itself is pointed, like the top of a pyramid.

Why not get rid of the entire building and rebuild on top? The roof was designed by architect Paul Thiry for the 1962 Seattle World’s Fair, which makes it an important piece of history that could not be destroyed.

So builders literally lifted the famous roof off the existing arena using 72 temporary steel columns to support it, wiping out everything underneath it and essentially starting the arena itself from scratch.

Eventually, the old roof was lowered onto the new arena, preserving a unique piece of Seattle history and giving this brand new gem of an arena plenty of classic charm.

More than 600,000 cubic yards of dirt were removed to create the bowl for the new arena, which sits 53 feet below street level outside.

That allowed for Climate Pledge Arena to be nearly twice the size of the old Key Arena that sat on site before.

The tunnel located just underneath the boat-like platform in the arena’s upper-level brings fans in from street, which gives you an idea of how far down the arena’s ice surface really is.

Another cool part about the experience is that the arena itself sits in a very unique location. There is a Catholic Church and a Post Office right across the street, and the building itself is situated in the middle of a neighborhood.

And because the playing surface inside the arena is located more than five stories below ground level, the famous pyramid roof doesn’t stick out as much as you’d think.

The only arena in the NHL without a center-hung scoreboard, Climate Pledge Arena makes up for it with the fact that it has TWO large, three-sided video boards that hang over each offensive zone.

That means that no matter where you sit in the building – even the cheapest seats in the house – you’re going to have a prime view of video replays inside the arena.

Climate Pledge is the first arena to try this, but they certainly won’t be the last.

Outside the visitor’s dressing room, you get a picturesque view of the skyline of Seattle at sunset … although the view itself is a panoramic photo spread over the length of an entire hallway.

And while the view isn’t real, it’s a unique touch that certainly beats the bland, blank walls seen in other arenas around the league.

Sustainability is the touchtone of the arena itself – look no further than the name itself.

Amazon actually purchased the naming rights to the facility, but named it Climate Pledge Arena, “as a reminder of the importance of fighting climate change,” Amazon CEO Jeff Bezos said when announcing the naming deal.

To that end, Climate Change Arena doesn’t just walk the walk, it talks the talk.

It is the first net-zero carbon-certified facility in the world. The arena is entirely electric, and is powered by 100 percent renewable electricity, from on-site solar panels and off-side renewables.

All operations and events use compostable containers.

Even the ice the Kraken skate on is made from reclaimed rainwater.

The environmental themes inside the arena’s concourses and in the hallways is also a unique touch. In one photo above is a concourse spanning the entire end of the rink (the long way) featuring real plants growing on walls and from the ceiling.

In the other photo is an LED display featuring a living, moving waterfall in the middle of a forest. The attention to detail around other beams in the arena is remarkable.

And of course, what Seattle arena wouldn’t be complete without a great view of the famed Space Needle, located just down the street from the arena itself and clearly visible from one of the atriums.

Climate Pledge Arena has a very U.S. Bank Stadium-like feel with the sheer number of windows and the amount of natural light that enters even though the building is entirely indoors.

All photos by Dan Myers